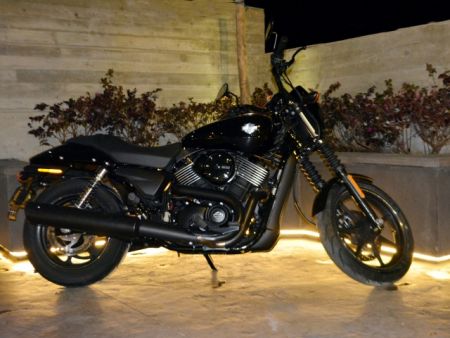 Beirut: March 28, 2015 – Harley-Davidson® is continuing its monumental ride, which began with the introduction of Project RUSHMORE, by launching a new Dark Custom™ motorcycle designed for young urban riders around the world. The new motorcycle was launched on March 28th at the new Harley-Davidson® Cedarwoods dealership at their new showroom located at Red Square Center, Sea Side Road Beirut, Lebanon. There was a grand unveiling ceremony that welcomed an audience of over 200 people enthusiastically waiting to see the new addition to the Dark Custom™ family. The launch brought together Harley-Davidson® fans filled with a variety of activities and entertainment followed by an after party.

The event was further celebrated by the yearly Spring Ride where around 350 people joined from the region. Motorcycle enthusiasts took part in the ride through the South of Lebanon while enjoying the scenic views of Lebanon in spring.

“We are extremely thrilled about the opening of our new dealership in Lebanon which has fortunately coincided with the reveal of the new Street™ 750. Owning a Harley-Davidson® is not just about owning a motorcycle, it’s an experience; and we wanted to ensure we provide our services to existing and prospective customers from all parts of Lebanon.” said Marwan Tarraf, Owner and General Manager, Harley-Davidson® dealership, Lebanon.

The Harley-Davidson Street™ 750 motorcycle – the first all-new platform from Harley-Davidson in 14 years – is built for urban environments with all-new liquid-cooled Revolution X™ powertrain, nimble agility and the sound and look that lets everyone know it is a genuine Harley-Davidson.

The bike is aimed at attracting young Riders, especially in an urban city like Beirut, who are looking to enter the world of Harley-Davidson® inclusive of women who would like to be part of the Ladies of Harley family.

“We hope that this latest motorcycle to join our Dark Custom lineup would help make us the number-one selling brand to young adults for the coming years” added Tarraf.

The new Street™ 750 was designed with thousands of hours of input from young adults in cities around the world. This input guided both the attitude and capabilities of this motorcycle. It is proof that being customer-led continues to be a core driver of the product development process.

The Street™ 750 from Harley-Davidson® is built for an urban environment. It features the new, Revolution X engine, designed to match the demands of stop-and-go traffic with nimble agility, while delivering instant throttle response to escape city gridlock.

The Revolution X engine is housed in a new, narrow and lean chassis, with a super-low seat, new suspension and broad handlebar sweep that provides confidence and manoeuvrability when managing tight turns and fast moves. This signature Dark Custom motorcycle features a premium, minimalist style that serves as a blank canvas for riders to customize.

“The Harley-Davidson Street™ 750 is designed specifically to meet the needs of urban riders and is the ideal way to discover their city in style. It is also a bike that assists with unique challenges faced by riders in different climates across the region. It marries nimble manoeuvrability; unique Dark Custom style and instant power helping riders escape the cars, buses and taxis that clog inner-city roads’ added Elsa Abi Nader, Regional Marketing Manager, Harley-Davidson® Middle East and North Africa.